Before reading all of these suggestions and complaints please keep the following in mind: I love MediaMonkey !

I have been using MediaMonkey 4 for so many years I can’t even remember, and I like how it works and how reliable it is.
I am writing this feedback because I want MediaMonkey 5 to be an even better product. This is not written out of hate. I did not go out of my way to make all these screenshots and examples just to bash a great product.

Note: This post is also linked in the MediaMonkey forum at the URL: XXXXXXX

In Music / All tracks there is a view mode named List (by Album). This view shows the Artwork really nicely, even if we sort only by Title (which I generally do) because the row height is increased to accommodate artwork size: 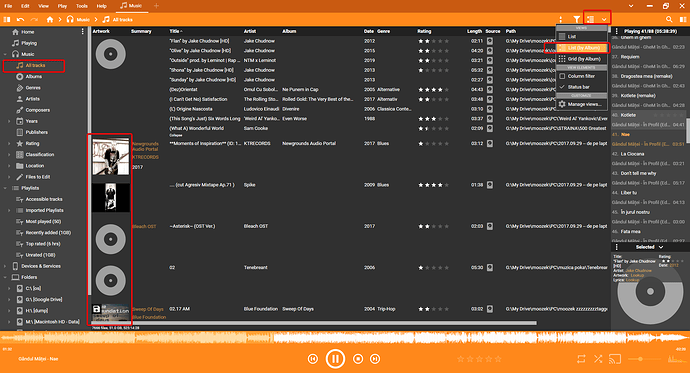 I would like to have this view available everywhere, especially in Playing.
Right now Playing only has the List view, and manually adding the Artwork column looks ugly as the Artwork is cut since the row height is not modified to fully display it: 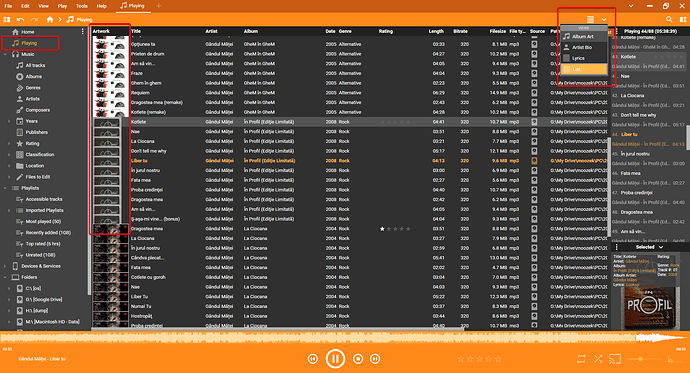 3. Rating Up and Rating Down hotkeys should be switched by default

This seems counterintuitive to me as 7 is greater than 6, so i would expect (similar to the other rating hotkeys which are increasing: 1 2 3 4 5) that pressing 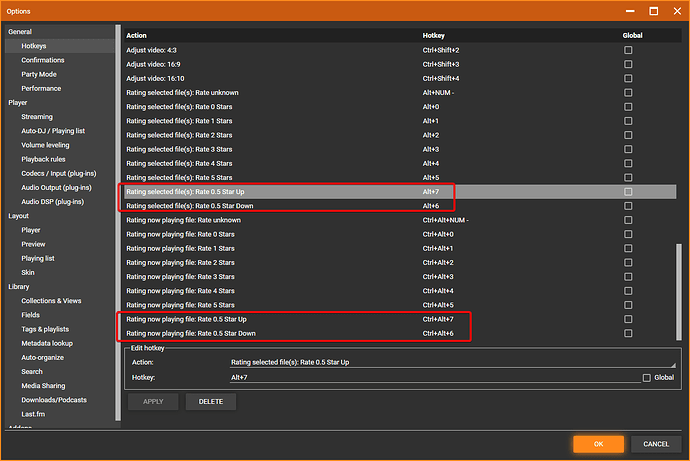 Some may say that doing this change may inconvenience muscle memory for some people (those used with MediaMonkey 4.

As an (opinionated) software developer, I strongly believe in doing The Right Thing™. And in this case, The Right Thing™ is to use my suggestion even if muscle memory is lost.
Muscle memory can be re-trained. Plus, for those who really, strongly don’t want to re-train, they can quickly change it back. It is my belief that teaching people to do it the right way from the start is an acceptable breakage, especially since this is a whole new MM version.

4. Horizontal scrolling: Shift + Scroll does not work in Playing

It’s as if the horizontal refresh is done maybe at 15 FPS instead of 144 which is my native refresh rate.
See the following gif: MediaMonkey 5: vertical vs horizontal touchpad scrolling - Imgur.

6. Artwork is displayed wrong when scrolling

Please see in the vertical scrolling example above: the artwork refreshes during scrolling. This happens for each individual scroll up and scroll down, for the tracks which go and come into view.

Currently, when clicking a column to change the current sort order, the “scroll position” is shown. This means that the “selected song” (or currently playing song) are hidden and moved out of view.

I believe MediaMonkey should change the current “scroll position” and show me the selected song (or currently playing song if no selection is done) instead.

Observe that in the gif below the same track number is kept - 3976 - and the same scroll position, but the current song which i was looking at is gone. This forces me to search for my song again, so that i see the “other songs from the same artist”.